It has been a LONGGGGGG time since I have posted on here.  I don’t know how it is even possible, but it has been over 3 years!  My life has changed drastically in that time.  Some of the major changes include having a baby with severe Obstructive Sleep Apnea (Mar 2016), putting one of my kitties to sleep (Oct 2016), a hospitalization on a psychiatric floor (Nov 2017), selling our house and moving into one newly built (Mar 2018), starting a new job (June 2018), the kiddos starting daycare (June 2018), my oldest starting Kindergarten (Sept 2018), undergoing gastric bypass surgery (Sept 2018) and multiple complications that followed in the months since, and most recently losing our first dog (Apr 2019).  Those are just some of the big ones that have shaken things up quite a bit!  Over time I may try to do some posts detailing some of those big events, but for today I want to talk about a new item I crocheted.

As a kid, I loved running around during the summer time playing with water balloons!  It was not so fun filling those water balloons up.  It seemed to take forever, and it seemed like in less time than it took to fill them, they were all popped!  Then there was the pain of picking up all of the little pieces.  Fast forward to adulting…it is still a pain to fill them up individually, and I’ve always been too cheap to spring for the devices that fill many up at a time.  Cleaning up all of the pieces of balloon is even less fun as an adult.  Plus, maybe its the nurse in me, but I’m afraid a small child will put a piece in their mouth and choke.  I may be trained to save someone from choking, but that is not something I want to practice!  I stumbled across a pattern for crochet water balloons over at Left in Knots.  I made up a few (pretty quickly I might add), and I cannot wait for it to warm up a little so I can send the kiddos out to try them!  (Who am I kidding, I’ll probably throw a few at the adults in my life too!)  There is no waste using these; I’ll be able to throw them in the washer/dryer when they get dirty, and then re-use them.  I won’t have to spend hours filling balloons, only to have them all gone in a matter of minutes.  And I don’t have to worry about kids or animals putting pieces in their mouth and choking!

Here are the first few I made (my little buddy picked the yarn color).  I’ll probably make some more in different colors soon!

Once we test them out, I’ll update with how the kids like them!

When my husband and I were still dating, we went camping in a tent a few times.  Most often it was rustic camping, and I would have to drive myself to the bathroom (I have never been able to pee outside!)  There were no showers, and we spent most of our time canoeing and drinking.

This past winter, we bought a camper.  It is a 24 foot Coachmen.  It has no slides, 1 bedroom, a set of bunks, a bathroom with a tub, a kitchen and a dinette.  Here are some pictures of the camper. 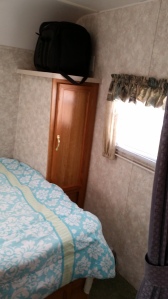 More of the bedroom 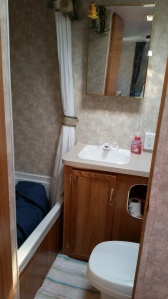 While we would love to have a little bit more space with a bigger camper, this one is just big enough.  If it were any longer, we would have to pay for storage.  I made the divider curtain for the bedroom, the curtains for the bunks, and the sheets for the bunks.

For our first trip, we went to a private camping resort.  When we bought our camper, we received free nights of camping at the resort.  They of course attempted to sell us a membership which is required to camp there, but it comes with a big price tag!

We left on Friday morning.  We brought the dogs with us and had to figure out how we were all going to fit in the truck.  The plan was to have one in the back seat and one in the front seat.  We didn’t even make it off of our street before we realized that wouldn’t work.  Neither dog was willing to lay down when they were in front which meant my husband couldn’t see the trailer in the mirrors.  We stopped and squeezed them both in the back.  It looked like it would be tight but it ended up working out.  We had given our white dog Maverick an anti-anxiety medication from the vet before we left because he has so much anxiety with car rides.  It was the first time we had given it to him and they said to start with one.  It did not help at all.  (We ended up giving him 2 on the way home which worked much better!)  We had some trouble during the drive.  We had a guy pull up in a trunk and honk.  When we rolled down the window, he told us our bike was dragging!  Hubby pulled over and said the bike rack was broke (it was the first time we had even used it, and we only had 2 bikes on it).  Hubby put one bike in the bed of the truck, and the other inside the camper.  Fortunately, my bike was okay despite dragging on the freeway!

At this campground, you pick your site when you get there.  There weren’t many people there when we arrived, so we had almost too many sites to choose from.  I saw a couple of young kids running around near a few campers, so I suggested picking a site near them.  We also needed a site with the one next to it available for my husband’s cousin and her husband.  For our first time setting up, it went rather smoothly.  After we thought we were hooked up to power for an hour, we realized the fridge wasn’t working.  It turned out the breaker we were hooked to didn’t work.  I then realized that hubby had plugged in to the wrong site’s power.  We switched it to the one that was for our site and the power worked.  I had to use my critical thinking skills to hook up the awning tie-downs since we couldn’t find the directions.  Hubby was proud of me for figuring that out! 🙂  We brought a big screened in tent to put the picnic table under.  After setting it all up, we realized it wouldn’t fit well anywhere on the site.  It was also pretty windy, so we were getting frustrated.  Hubby decided that we just weren’t going to use it, and he took it down.

Surprisingly, we only forgot a few things (hubby’s deodorant, baby sunscreen which we actually did have but hubby couldn’t find, and second stake for the dog tie outs).  Fortunately for us, my mother-in-law doesn’t live far from the campsite and she was coming to visit anyway, so she offered to stop at the store for the things we forgot.  We also had to have her pick up bigger trash bags because the ones we had didn’t fit our outdoor trash.

Once we were all set up, we had a great weekend!  The weather was incredible: sunny and warm with a light breeze!  We had friends and family come visit, we went on walks and bike rides, went fishing (we didn’t catch anything), played tennis, ladderball, and euchre, went on a paddleboat, and went swimming in the indoor pool.  We also spent each night around the campfire. Here are some pictures from the weekend: 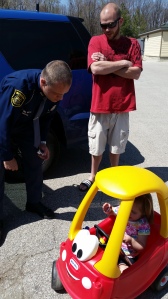 Savannah got to meet a state trooper. He gave her a sticker and coloring book! 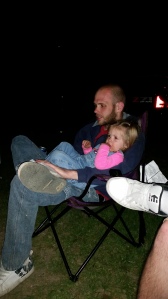 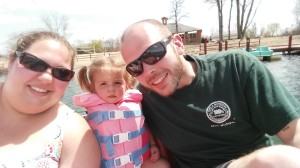 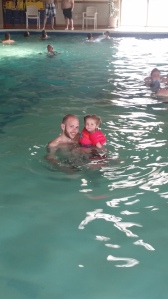 I gained a pound and a half after the weekend.  I am not super upset about it because I know I didn’t follow the program 100%.  Overall I did well, but I wish I had done a little better for the sake of the competition.

I learned a few things from this first camping trip:

I can’t wait for our next camping trip!  We plan to bring a little bit less stuff this time though!

What are some tips you can share that you have learned from camping?